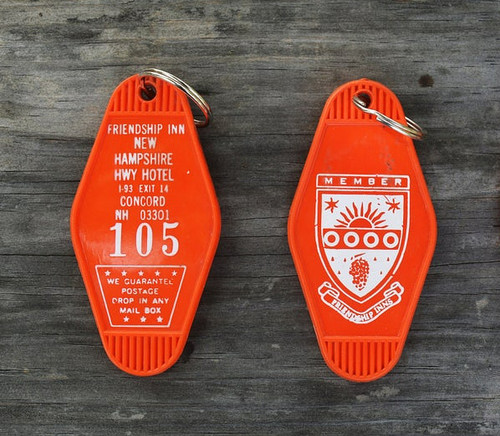 Vintage from the 1960s!
These keychains come from the Friendship Inn at the New Hampshire Highway Hotel in Concord, New Hampshire. They were originally used as guest keys at the hotel.
The hotel, just off Interstate 93, was built in 1951 and was a center for political gatherings in the lead-off presidential primary state. Among those who slept, ate, and headquartered their campaigns at the Highway Hotel were President Reagan, former Presidents Kennedy, Nixon, and Ford, Gov. Nelson Rockefeller and Sen. Robert F. Kennedy. The hotel burned down under suspicious circumstances in 1988.